Last month, an event titled “A Concert for Unity” was held at the Washington National Cathedral.  It was billed as an invitation-only affair presented in cooperation with the Embassy of the Russian Federation.  The concert announcement listed sponsors including the John F. Kennedy Center for the Performing Arts and the Wilson Center’s Kennan Institute, among other, less prominent non-profit organizations whose mission statements assert support for the arts, Russian culture, democracy and/or religious freedom.  The full announcement is available at wilsoncenter.org. 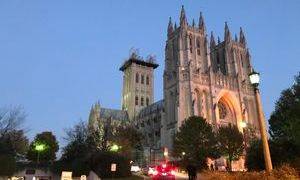 The concert caught the attention of the Central and East European Coalition (CEEC) due to the controversial background of the artists listed.  Two of the featured performers are known agents of Putin’s campaign of economic and cultural influence to promote Putin’s Russia and normalize relations with the Kremlin.  Conductor Valeri Gergiev and pianist Denis Matsuev are both on record endorsing Russia’s invasion of Ukraine and occupation of Crimea, and performed in Syria while Russian warplanes were bombing Aleppo. Gergiev also performed in Georgia days after the 2008 Russian invasion, effectively endorsing ethnic cleansing of Georgians.

The CEEC considered the event an affront to the values of its member organizations and was surprised that the Kennan Institute and Kennedy Center would lend their names in support.  Washington Post reporting indicated that the event was funded by a DC socialite who has a history of promoting cultural understanding between the U.S. and Russia, and that the Kennedy Center supported the event in name only.  Even so, the CEEC has pursued the matter further by writing to three institutions – the Kennan Institute, the Kennedy Center and the National Cathedral – expressing dismay and requesting more information from the leader of each regarding their rationale for backing the event.

While the CEEC understands that the aim of the event may have been to keep politics and cultural pursuits separate, this message would have been more effective if the event’s benefactor and featured artists didn’t have clear political ties. These artists and the source of the event’s funding certainly did according to the Washington Post article linked above.

The CEEC hopes that the institutions in question will respond to its letters and will publish any pertinent updates as they are received.  The organization was established in 1994 to coordinate the efforts of ethnic organizations whose members continue to maintain strong cultural, economic, and political ties to the countries of central and eastern Europe.  It represents Americans of Armenian, Belarusian, Bulgarian, Czech, Estonian, Georgian, Hungarian, Latvian, Lithuanian, Polish, Romanian, Slovak, and Ukrainian descent.  Its member organizations, including the Estonian American National Council, cooperate in calling attention to issues of mutual concern, especially regarding United States policy toward Central and East Europe.  Please see ceecoalition.us for more information.

The House Baltic Caucus (HBC) turned 20 this year and was recognized with an elegant reception on Capitol Hill attended by members of Congress, Baltic parliamentarians, embassy officials and other friends of the Baltics.  The event was organized by the embassies of Estonia, Latvia and Lithuania, and the Joint Baltic American National Committee (JBANC), to thank caucus members for their support over the years and to welcome new members.  Distinguished participants included caucus co-chair, Representative John Shimkus (R-IL), and caucus members Rep. Andy Barr (R-KY) and Rep. Doug Lamborn (R-CO), along with Marko Mihkelson, Chairman of the Estonian parliament’s Foreign Affairs Committee; Solvita Āboltiņa, Chairwoman of the Latvian parliament’s National Security Committee; and Emanuelis Zingeris, Chairman, United States Caucus, Lithuanian Parliament. 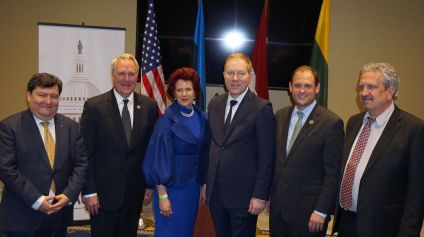 After welcome remarks by JBANC managing director Karl Altau, Mr. Mihkelson thanked the HBC especially for its work during the process of NATO enlargement.  He noted that Estonia is not just a consumer of security but has also become a provider.  Estonian troops have been active members of many NATO deployments and are currently increasing their presence in Afghanistan.  As Russia is testing the West wherever it can, we can’t take the world order for granted and the HBC’s role will remain as important as ever.

Rep. Barr thanked the three Baltic governments for their commitment to allocating 2% of their budgets to defense and outlined areas where continued cooperation will be important.  Working together on deterrence, sanctions oversight, and pressing the Administration on the importance of energy security are key areas of focus.  He stressed that Article 5 is alive and well, and the U.S. will continue to be side by side with its allies, standing united in bipartisan, bicameral support. 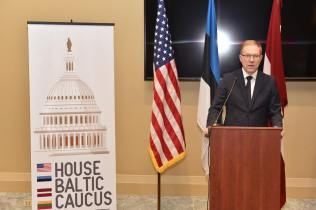 Rep. Shimkus thanked the audience for remembering their ancestry and pushing their members of Congress to remain engaged in the region.  He also applauded the Baltic nations for helping their neighbors as they struggle with evolving democracies.  Estonia, Latvia and Lithuania have set commendable examples for other countries that yearn to be free.

The HBC’s membership now stands at 74, with 22 of those joining in 2017, thanks at least in part to outreach by JBANC, its parent organizations, and their constituents.  EANC is proud to actively support these efforts and will continue to do so.  We also invite Estonian Americans to check the list of HBC members at http://housebalticcaucus.webs.com and make a call to thank caucus members or ask Representatives not listed to join.  The last 20 years have shown that Congress supports the Baltic region and welcomes engagement from their Baltic-American constituents.  We look forward to the next two decades of security, stability and progress bolstered by continued strong U.S.-Baltic cooperation.

Several events this fall highlighted the interest shown among multiple Washington circles in matters concerning Estonia and the Baltics.  Visiting officials included Estonian ministers, parliamentarians, and cyber security experts, while think tanks hosted Baltic and Scandinavian panels, and members of Congress met with their Baltic counterparts to discuss security issues in the region. 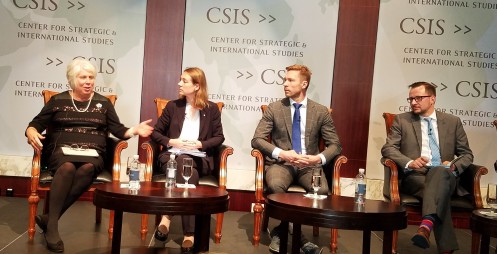 In October, the American Foreign Policy Council (AFPC) and the Center for European Policy Analysis (CEPA) held discussions centered around Russian influence in the Baltic region and how the West should respond.  Russia’s explicit agenda to change the European security order from rules-based to interest- based was noted.  Strong democratic institutions don’t suit Russia’s interests, so the Kremlin is actively working to undermine them in the Baltic nations and elsewhere.  NATO’s enhanced forward presence in the region has bolstered overall security while Russia has overstretched its military capabilities, but information warfare remains a threat that Western powers have not yet addressed effectively.  Russia especially excels at using high-quality entertainment to subtly propagate its agenda in Russian-speaking communities, a capability not fully recognized or understood in the West.  Recommendations included being more proactive in the information space, framing requests for U.S. support in terms of U.S. national interests, and putting more focus on deterrence in the air and sea domains.

The Center for Strategic and International Studies (CSIS) hosted panels to review the progress Estonia has made in cyber security since the first attacks against its government in 2007.  Former president Toomas Hendrik Ilves shared his remarks by video while former foreign minister Marina Kaljurand and other distinguished experts held lively discussions on their roles in analyzing and responding to the attacks, along with lessons learned and developing strategies for deterrence, protection against future attacks and fostering stability in cyberspace.  The full video of the event is available on the CSIS website, www.csis.org, under Events > Past Events > November 6, 2017.

Later in November, Estonian Interior Minister Andres Anvelt was in Washington to attend the EU-U.S. Justice and Home Affairs Ministerial meeting.  The Atlantic Council also hosted a roundtable discussion that included several senior current and former State Department officials, and featured Anvelt’s views on countering Russian disinformation.  The take-aways from the meeting stressed the importance of exposing lies in the media, promoting open and transparent governance, and upholding the principles of freedom and democratic values.

Finally, members of the Estonian parliament (MPs) were in DC to meet with counterparts in the Senate and House Armed Services, Appropriations, and other committees.  They also made time to sit down with EANC President Marju Rink-Abel and Washington, DC Director Karin Shuey, along with officials from the Estonian embassy.  Topics discussed included U.S. and Estonian security policy, the growing U.S. government interest in Estonia, Estonian government relations with the diaspora community, and areas for future cooperation.

EANC very much values its good relationship with the embassy and the resulting opportunities to meet with Estonian officials when they visit Washington.  We will remain engaged in all levels of the DC foreign policy community and keep our constituents informed on policy and events.  Please also make regular visits to our website at estosite.org to stay current on news of interest to the Estonian American community.