The Estonian American National Council (EANC) is once again joining forces with our Central and East European Coalition (CEEC) colleagues to help Estonian Americans and other regional diaspora members contact their Members of Congress (MoCs) on issues that impact Baltic and European security.  On June 13th, we are holding an advocacy day to engage with Senators and Representatives on a number of topics and current legislation.  One of EANC’s missions is to help Estonian Americans connect with their Congressional representation on issues that impact Estonia’s security and this is our latest effort to further this goal. 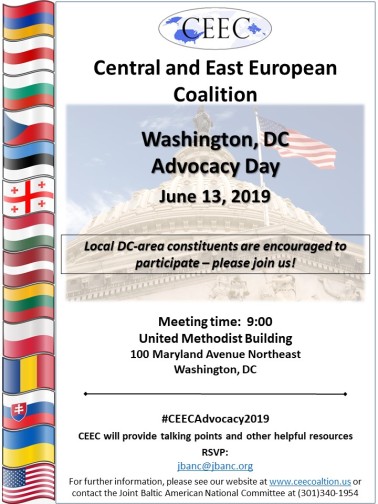 This event is focused on gathering constituents from the DC metro area to visit Senators from Maryland and Virginia, and Representatives from districts close to Washington.  We are also requesting meetings with Senators Ted Cruz (R-TX) and Jeanne Shaheen (D-NH), and Representative Denny Heck (D-WA), to express support for their bills to protect European energy security (S.1441 and H.R.2023, noted above).

The CEEC also intends to honor Representatives Gerry Connolly (D-VA) and Michael Turner (R-OH) with the Friend of the CEEC award for their work in Congress to uphold transatlantic values and relations.  Both are members of the U.S. delegation to the NATO Parliamentary Assembly.  Rep. Connolly is the current head of the delegation and Rep. Turner led the delegation from 2014 to 2016.

Our talking points for the meetings highlight several concerns for security in the region.  Our first point is to remind Congress that the CEEC represents 20 million voters from 13 diaspora communities spread across the U.S.  We regularly share our concerns and ideas with Congress and the Administration and work to raise the awareness of our Senators and Representatives regarding specific legislation that addresses our issues.

The current legislation to be discussed includes the Defending American Security from Kremlin Aggression Act of 2019 (DASKAA – S.482); the Defending Elections from Threats by Establishing Redlines Act of 2019 (DETER – S.1060); and resolutions that affirm U.S. commitment to NATO and recognize that its contributions over the last 70 years are vital to U.S. national security, such as S.J.Res.4, S.Res.123, and H.Res.291.  For more information on each piece of legislation, please visit www.congress.gov and search by the number provided.

Other advocacy topics for this event include:

If you are a constituent of any of the MoCs mentioned here or districts in the DC area, please consider joining us on June 13th.  Please see the CEEC website for more information on the event and how to RSVP, or contact EANC’s Washington, DC Director Karin Shuey at karinshueyeanc@gmail.com.  EANC and our CEEC colleagues look forward to seeing you there!