The Victims of Communism Memorial Foundation (VoC) held its annual Triumph of Liberty Conference and Gala Dinner on November 14th.  The event takes place each year to remember the victims of communism in Central and Eastern Europe, and worldwide, while encouraging commitment to confronting today’s revisionist powers and defending the right of all people to live in freedom.  The Truman-Reagan Medal of Freedom is awarded annually to notable opponents of communism and this year went to three leaders from the Baltic nations.  They were former President of Lithuania Valdas Adamkus, Member of European Parliament for Latvia Sandra Kalniete, and Member of European Parliament for Estonia Tunne Kelam.  While this article will focus on Mr. Kelam, more information on each honoree is available at triumphofliberty.com. 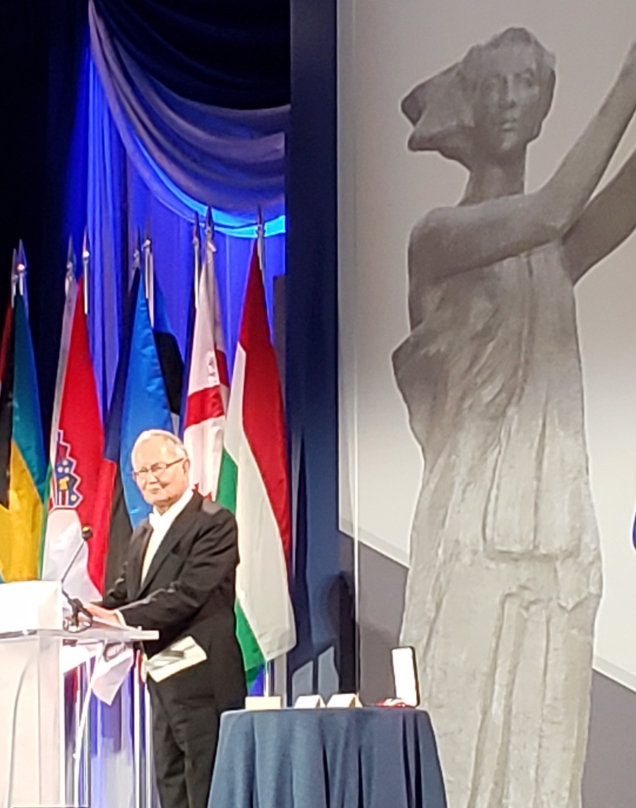 Mr. Kelam addressing the audience with an image of the Victims of Communism Memorial in the background

Mr. Kelam was recognized for his dedication to opposing the Soviet occupation of Estonia and calling out human rights violations there during the occupation.  His fight for freedom began in 1972, when he made a formal appeal to the United Nations on behalf of underground citizens’ groups asking for support in ending Soviet rule and organizing free elections.  He continued his work over the next two decades, under constant KGB surveillance and at great danger to himself, by organizing unofficial opposition groups and keeping the West informed about the human rights situation in Estonia.  He was a founding member of the Estonian National Independence Party in 1988 and was instrumental in restoring Estonia’s statehood.  He was elected to Estonia’s first post-occupation constitutional parliament, or Riigikogu, in 1992 and served for 12 years.  He also represented Estonia in the Convention on the Future of Europe and was elected to the European Parliament for three terms.

Mr. Kelam’s remarks included citing the U.S. policy of non-recognition of the annexation of the Baltic nations as “a big annoyance [to] Soviet diplomats.”  He applauded the VoC for its work in honoring victims of communism as a matter of justice and also a practical concern in ensuring the history of communism’s horrors are not forgotten or repeated.  He compared Putin’s rise in Russian politics to the rise of Nazi rule, asking the audience to “imagine that a Gestapo officer would become Chancellor of Germany.”  His personal reflections recalled that there was always a choice to not join the Soviet Party.  He learned early on from his mother’s example that he didn’t have to vote for the regime.  He told of how he “always voted against.  My conscience is clean.”

He ended his remarks with his observation that “freedom can never be totally suppressed.  In this, totalitarian systems have failed.”  Although truth is more difficult to recognize today, “being free means taking responsibility for yourself – freedom begins with individuals.  If a government becomes ill, citizens can help with its recovery” by rediscovering and acting from their values. 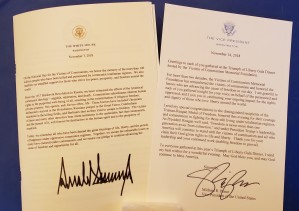 Presidential  proclamation and greetings from the Vice President

The keynote speaker for the event was retired U.S. Marine Corps General and former Chairman of the Joint Chiefs of Staff Peter Pace.  The program included the recent Presidential proclamation designating November 7th as the National Day for the Victims of Communism and greetings from the Vice President.  Remarks were made by the Chairman of VoC Dr. Lee Edwards, and the three honorees, with President Adamkus speaking via video message.  Photos and video of the event will be available on the VoC website; a link will be posted on EANC’s Facebook page as soon as it is available.

EANC’s council for the 2018-2022 term held its  first annual meeting in Philadelphia over the weekend of November 3-4, 2018.  Twenty-eight of thirty council members attended, along with Estonian Society representatives from seventeen communities around the U.S. (some of whom are also council members).  Several special guests rounded out the busy and informative weekend agenda.

Estonian Ambassador to the U.S. Jonatan Vseviov led off the guest speakers with greetings from the Estonian government and remarks stressing the importance of diaspora involvement in issues ranging from security to cultural and language preservation.  He identified as one of Estonia’s priorities “making sure that NATO is capable and credible” to defend against the Russian threat.  The U.S. can’t be secure without a secure Europe, meaning “defense of the U.S. starts at the Narva River.”  Making the case to Congress of alignment between U.S. security interests and Estonia’s is one way Estonian Americans can help maintain U.S. support for NATO, which Estonia relies on as a primary deterrent against Russian aggression across its borders.

Other guest speakers included Estonian American Andy Prozes, who talked about his support and promotion of Estonian entrepreneurs and start-ups in the U.S. and Canada.  American Latvian Association president Peter Blumbergs and Joint Baltic American National Committee (JBANC) managing director Karl Altau informed the audience on the work of JBANC and the importance and successes of cooperation among the Baltic American communities.  Kärt Ulman, editor-in-chief at Nordic Press, highlighted the unique role Vaba Eesti Sõna plays in publishing news of interest to Estonian Americans and providing an historical archive of the evolution of Estonian American institutions and activities since the newspaper’s inception in 1949.

Another important undertaking for the meeting was the election of this term’s board and officers.  Marju Rink-Abel of Maryland was elected to her fourth term as president.  The following officers were also elected:  Mai-Liis Bartling of California – Vice President for Strategy; Matti Prima of New Jersey – Vice President for Outreach and Treasurer; and Tiina Urv of Maryland – Secretary.  The other board members are:

The new council and board are excited to continue building on the great work EANC has done and finding new ways to be more helpful and relevant to the Estonian American community nationwide.  Facilitating better connections among communities and engaging Estonian American youth were among the priorities discussed.  EANC is looking forward to actively serving and engaging with its constituents over the next four years.  Please check our website at www.estosite.org regularly for updates on our latest news and initiatives.