The Central and East European Coalition (CEEC) hosted a policy seminar on September 27th titled, Russia on NATO’s Doorstep:  the West’s Response to the Kremlin’s Wargames, to examine the aftermath of Russia’s Zapad 2017 military exercises.  The panel of experts consisted of Ambassador Kurt Volker, Special Representative for Ukraine Negotiations; Dr. Stephen Blank, American Foreign Policy Council Senior Fellow for Russia; Ambassador Eitvydas Bajarunas, Ambassador-at-Large for Hybrid Threats, Lithuanian Ministry of Foreign Affairs; and Alex Tiersky, Global Security and Political-Military Affairs Advisor, U.S. Helsinki Commission.  The discussion was moderated by CEEC colleague, Dr. Mamuka Tsereteli of the Georgian Association in the U.S.  Although analysis of the exercise will be ongoing for weeks, they offered their perspectives from their respective backgrounds and the information available so far.

Ambassador Volker started off by acknowledging the CEEC’s important role in promoting NATO enlargement.  He encouraged the coalition to continue its work to remind Congress and policymakers that these countries matter and constituents of heritage from the region care about U.S. policy affecting it.  He then framed Zapad in a context of Russia on a trajectory that is still playing out.  In the 1990s, Russia was trying to find its place in Europe.  The Soviet Union had agreed to the fundamental principles of European security and cooperation outlined in the Helsinki Accords and seemed inclined to engage 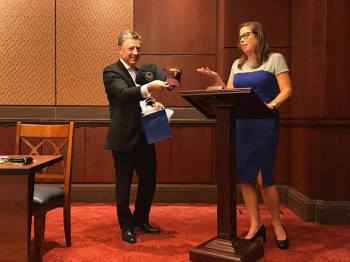 EANC Washington, DC Director Karin Shuey presents a token of appreciation on behalf of the CEEC to Ambassador Volker.  Photo courtesy of JBANC.

with Europe on those terms.  Then Putin came to power and Russia’s policies began to contradict democratic values, taking an imperialistic view over all Russian speakers wherever they lived.  Europe rejected him and concern over Russian expansionism set in.

Volker saw Zapad 2017 in this context as a vehicle for the Kremlin to demonstrate to its neighbors, domestic population, and to western Europe, recent improvements in the Russian military’s capabilities, doctrine and funding.  At the same time, there was no indication of intent to expand geographically.  Sanctions over Russia’s actions in Ukraine and increased activity in NATO have perhaps had an impact on Putin’s ambitions.  Since the invasion, Ukraine has elected a government that is the opposite of his presumed goal – it is unified, anti-Russian, and westward-looking.  Keeping the occupied territory in eastern Ukraine is coming at great cost to the Kremlin.  Volker sees his task as bolstering Ukrainian will to facilitate the removal of Russian troops and reestablish sovereignty, while creating the right conditions for the Kremlin to see the withdrawal of troops as in its own interests.

Dr. Blank identified the need for NATO to understand the threat before it can act effectively in consensus.   Russia sees itself at war with the West even if Europe doesn’t want to admit it.  Democratic transatlantic integration threatens Putin, who doesn’t acknowledge the post-Cold War settlement or sovereignty of any eastern European state.  He has no hesitation to exploit Western vulnerabilities, whether through corruption, access to energy resources, or ethnic and religious tensions.  His objective is to fracture Western cohesion.  Blank also noted that while strong transatlantic ties may threaten Putin, they actually work in the interests of Russia’s population and well-being as a nation.

Blank went on to assess the region’s military situation.  He emphasized the importance of enhanced cooperation between NATO and its Nordic partners, specifically Sweden and Finland, to fill in gaps in air and naval capabilities.  Increased defense spending, better freedom of movement for deploying troops, and joint training and exercises in the theater also play key roles in deterrence.  On a more concerning note, while there is an ongoing debate among allies on the role of nuclear weapons in the defense of Europe, Russia has multiple new nuclear procurement programs and has violated every arms treaty except New START with no repercussions. 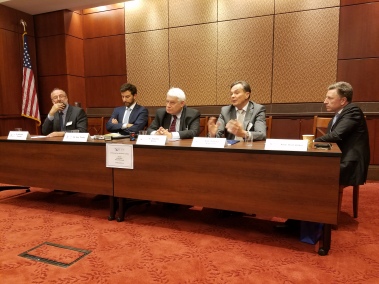 Mr. Tiersky was the only U.S. official invited by the Belarusian government to take part in the observer events for the exercise.  The Belarusian Ministry of Defense held a briefing of the scenario and troops involved, characterizing it as completely defensive and reporting that all Russian forces and equipment would leave upon completion of the training.  Tiersky reported that the view given to the observers was too limited to tell the actual extent of the maneuvers.  Assessments are still in progress and there was no consensus yet on what really took place.  The NATO commander’s office issued preliminary findings that the exercise was bigger than reported beforehand but there were no reports of the extensive alarming pre-exercise speculation coming true.  Tiersky noted that Belarus should be commended for offering some degree of transparency, indicating possible signs of new openness to the West, or perhaps a statement of sovereignty.  It was not, however, the full level of transparency that Western analysts had hoped for.

Tiersky identified a larger problem, in that Russia is failing to abide by multiple treaties.  They tend to avoid full reporting of their military training by conducting short-notice, so-called snap exercises, which don’t require the same level of reporting as scheduled exercises.  Helsinki Commission members need to revitalize their discussion on modernizing the Vienna Document to account for snap exercises and address the censure the Russian delegation faces on a regular basis.

Ambassador Bajarunas shared his views on the allies’ tendency to overemphasize the military aspects of the threat from the Kremlin, recommending continued investment in defense against both conventional and unconventional tactics.  He expressed the need for U.S. presence in the region with both military and government representation to cement resilience against the asymmetric threat.  Internal reforms are also necessary in many countries to address media literacy, corruption, intelligence sharing and other weak points that Putin can exploit.

In the end, the panel agreed that the principles of the Helsinki Accords should be upheld and allies should be clear that NATO’s mission is purely defensive.  Regardless of the final assessments on the meaning of this Zapad, the transatlantic community needs to reinforce for future generations the importance of intellectual, moral, economic, military and political unity for the health and well-being of all nations.  In the U.S., the CEEC can continue to advocate for policy that promotes democratic ideals and security for central and eastern Europe and beyond.

The CEEC was established in 1994 to coordinate the efforts of ethnic organizations whose members continue to maintain strong cultural, economic, and political ties to the countries of central and eastern Europe.  It represents Americans of Armenian, Belarusian, Bulgarian, Czech, Estonian, Georgian, Hungarian, Latvian, Lithuanian, Polish, Romanian, Slovak, and Ukrainian descent.  Its member organizations, including the Estonian American National Council, cooperate in calling attention to issues of mutual concern, especially regarding United States policy toward Central and East Europe.  Please see ceecoalition.us for more information.

At the CEPA forum, Minister Luik tackled what he considered the misconception that the Baltics are indefensible.  He deemed Estonia and its allies capable of creating an effective deterrent to conventional attack.  He cited the need for all NATO allies to overcome their political hurdles and meet or exceed the 2% benchmark for defense spending to further bolster the alliance’s deterrent posture.  He also stressed the role of the U.S. in coordination with the EU,

stating that, “nothing can replace the U.S. … as the guarantor of security in Europe.”  He expressed high regard for the robust signals of support the U.S. has consistently sent on political and practical levels, calling out European Deterrence Initiative funding as a strong symbol of U.S. commitment to European security.

General Kiili shared his thoughts based on Estonia’s experience under 50 years of Kremlin-led Soviet occupation and the psychological aspects of Russia’s multi-layered strategies.  He called the current state of affairs a clash between democratic order and oligarchic order, and named education on the Kremlin’s efforts to establish moral equivalency between their actions and those of the West as the highest priority for rendering them ineffective.  He characterized Estonia’s Defense League as an opportunity for every citizen to exercise their obligation and right to participate in the defense of their country.

Ms. Eslas explained how information attacks have been a part of digital warfare since 2015 and are aimed at damaging the three key pillars of liberal democracy, namely freedom of speech, free and fair elections, and rule of law.  One focus of countermeasures should be to strengthen those pillars.  She cited evidence of Internet bots (software applications that run repetitive tasks, like retweeting targeted messages) and their use in propagating disinformation, and made the point that limiting bots does not amount to restricting free speech for actual people.  She then outlined the challenge of overcoming the Kremlin’s propaganda campaign.  If Russian policy assumes that NATO is a threat and that all media is propaganda, then any attempt to counter those assumptions becomes fodder for more propaganda and justifies the false narratives.  We can understand disinformation in three parts:  sender, receiver and message.  While much is known about the senders and the messages, we need better understanding of the receivers in order to neutralize propaganda’s effectiveness.

The Atlantic Council event further highlighted the growing preponderance of weaponized fake news, politicized corruption, digital magnification of disinformation, and unattributed advertisements.  It also pointed out that the West has created the conditions for these tactics to thrive by permitting the creation of anonymous shell corporations for money laundering, allowing special interests to operate without 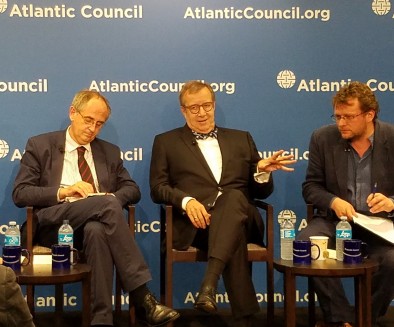 transparency, and holding online advertising to lesser standards than advertising in conventional media.  Sunlight and transparency were identified as the enemies of these practices and there was consensus that legislation requiring greater transparency is needed in all aspects of the problem.

President Ilves offered his observations on the Kremlin’s strategies.  He cited as his main concerns:  doxing (the practice of publishing private information on individuals or organizations, typically with malicious intent), Twitterbots magnifying false stories (as mentioned above), psychological manipulation, non-attributed ads on social media, and using metadata to target ads to sway opinion.  He noted that social media platforms have become more popular sources of news than traditional outlets, which adds to our vulnerability.  There has been a noticeable shift since 2014 – earlier, fake news was more easily identified and refuted or ignored by trusted news sources.  In recent years, even reliable outlets and print media publishers have started giving more attention to disinformation in the name of balanced reporting, while in fact they are actually skewing the picture in the favor of fake news.  When even outrageous lies get equal time with fact-based reporting, many consumers of the information draw the false conclusion that the truth is somewhere in the middle instead of accepting the factual reports.

President Ilves also brought up the Gerasimov doctrine – a 2013 article by Russia’s chief of the General Staff at the time that outlined the use of non-military tactics not just to augment the traditional tools of war, but as the preferred means to win the war.  Ilves warned against the danger of focusing too much on just fake news because this doctrine includes a broad spectrum of ways to manipulate and sow discord.  There is no reciprocal response.  Western nations can limit visas, enact laws against money laundering, investigate suspicious deaths, and watch and document how these tools are used but no collective defense has yet been developed.

The presence of Estonian representatives at both of these events shows that the tiny nation’s expertise is highly valued in NATO and the transatlantic partnership.  Estonia’s unique historical experience with threats from the east has ingrained in its population a deep understanding that its NATO and EU allies lack.  It was clear among both audiences and the other speakers that the Estonians’ voices on these matters were respected, and that they will be invited back on a regular basis as understanding of the threat from the Kremlin evolves.

For summaries and video of the CEPA and Atlantic Council events, please see www.cepaforum.org and www.atlanticcouncil.org/events/webcasts/stratcom-dc.  For more information on the Gerasimov doctrine, please look for Molly McKew’s Politico article on the topic.