An estimated 300 people braved the elements to take part in the Washington, DC community’s commemoration of the 30th anniversary of the Baltic Way.  The event was organized by a team made up of representatives from the three Baltic embassies, the Estonian American National Council (EANC), the American Latvian Association (ALA), the Joint Baltic American National Committee (JBANC), and the Victims of Communism Memorial Foundation (VoC). 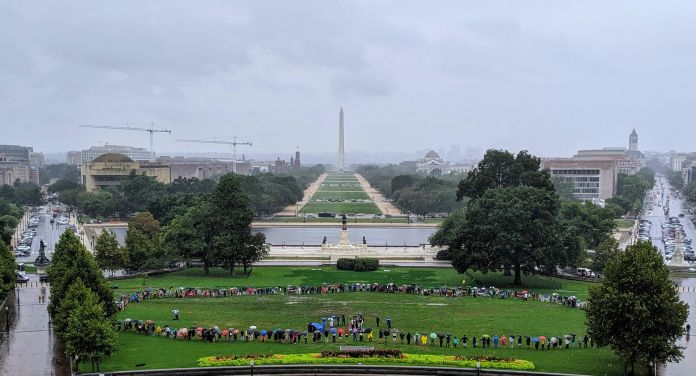 A view of the reenactment from the Speaker’s Balcony of the U.S. Capitol Building.  Photo credit:  Rimas Cikotas

The main speaker for the event was Estonian Ambassador Jonatan Vseviov.  He evoked memories of the solemn period that began with the Molotov-Ribbentrop Pact in 1939, the Baltic nations’ 1989 protest in defiance of that pact, and the hope and courage that turned over a new page in the region’s history.  He reminded us that the two powers that signed the pact are now gone while Estonia, Latvia and Lithuania are still standing 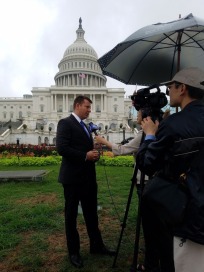 strong.  He concluded by saying that, “the message we are sending here today is not about the past…it is about the future.  And that future for as long as we stay committed to our principles…is going to be characterized by our courage and our hope and not by the despair and fear that others wish to instill in our hearts.”  Video of his full remarks is available on the Estonian Embassy in Washington’s Facebook page.

The Department of State’s Director for Nordic, Baltic and Arctic Security Affairs Erika Olson, and VoC’s Executive Director Marion Smith also made supportive and moving remarks.  They commended the peaceful protest model set by the Baltic Way and drew parallels to current events in the region and around the globe.  House Baltic Caucus co-chair Representative John Shimkus (R-IL) wrote a statement in support of the event that was read by JBANC Managing Director Karl Altau.  After the remarks, the song of Baltic sisterhood, Ärgake Baltimaad, Bunda jau Baltija, Atmostas Baltija, was performed by local Estonian, Latvian and Lithuanian singers, including Iira Reimann and Anna Maripuu of the Baltimore Washington Estonian Chorus.

EANC was represented at the event by President Marju Rink-Abel, former council members Kersti Linask and Lya Karm, and Washington, DC Director Karin Shuey.   Participants  traveled from as far away as Ohio and New York.  Riigikogu member and former commander of the Estonian Defence Forces Johannes Kert was visiting Washington and took part.  We know that commemorations also took place in Atlanta, Chicago, Cleveland, Connecticut, Lakewood, Los Angeles, and Seattle.  We thank all who participated in this historic anniversary and invite all to share photos to EANC’s Facebook page or via e-mail to Leelo Linask at llinask.erku@gmail.com or Karin Shuey at karinshueyeanc@gmail.com.

Mai-Liis represented EANC (as well as her local San Francisco Estonian Society) at various meetings and events.  She had the honor of carrying the flag from the 1953 festival in San Francisco during the opening ceremony procession of LEP flags.  She also worked with Portland’s Valdek Parik to bring the Estonia through 100 Pairs of Eyes exhibit to the festival, where it was featured prominently.  EANC was one of three organizations that sponsored the exhibit’s west coast tour.  More information on the exhibit is available at estonia.ee/estonia-through-100-pairs-of-eyes.

Karin held a well-attended seminar titled EANC, Advocacy, and You.  She covered the history of EANC and some of its past advocacy successes; other organizations it belongs to and works with; its current advocacy work, including the Baltic caucuses in the House and Senate; the top issues of concern for U.S. policy in the Baltic region; and how audience members could help advance U.S. policy related to Estonia and regional security.  She joined Mai-Liis in the opening ceremony procession, carrying the flag from the 1981 LEP in Seattle.  She also brought to the festival a miniature version of the exhibit she and JBANC created last year for display as part of the State Department’s recognition of the Baltic centennials, which was displayed near the event’s registration desk and viewed with interest by both festival attendees and other hotel guests.

Other distinguished speakers offered seminars on several other topics, as well.  They included discussions on Global Estonians – Estonian language and mind in the world – a vision for the future by Anne-Ly Reimaa; Estonian American Business Relations by Andrus Viirg; an overview of the new International Estonian Center in Toronto by Urve Tamberg; The Gift of Life: The Phenomenal Journey of Estonia’s Largest Charitable Fund in 5 Years by Toivo Tänavsuu; and Beltweaving by Katrin MacLean.

The first LEP was held in San Francisco in 1953 and was followed by events in 1955 in Los Angeles and 1957 in Portland, solidifying the biennial tradition.  It has rotated among these cities, Vancouver, BC, and Seattle ever since.  An informative history of LEP was written by Helmuth Kalmann of Portland when that city’s community last hosted in 2011.  It is available online at lep2011.portlandesto.org/an-overview-of-the-origins-and-development-of-the-west-coast-estonian-days.

While the duration and format of the festivals have evolved over the years, enthusiasm for the event among the west coast diaspora and beyond has not waned.  At the end of this year’s event, Portland Estonian Society President Kalle Merilo passed the flag to Seattle Estonian Society President Kristi Urv and we look forward to supporting Seattle’s event in the coming years.