While most of us are responsibly practicing our social isolation, NATO has also had to adapt its operations in the face of the Coronavirus pandemic.  Major exercises have been cancelled and NATO forces are responding to the COVID-19 crisis in several nations, while signs of normal missions and cooperation also remain.  Even during this crisis, NATO’s main task remains sustaining its ability to conduct operations and to protect the almost one billion citizens of its member nations. 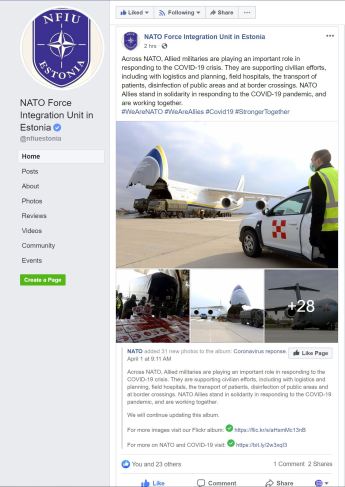 the alliance’s foreign ministers on April 2nd to discuss the crisis.  He noted, “NATO was created to deal with crises. So we can help and our Alliance is playing its part,” and expressed gratitude “for the…offers of assistance, which NATO Allies made today and for the substantial support that Allies have already provided.”  Military support to fight the coronavirus crisis includes transport of medical supplies and personnel to areas in need, logistics and planning, field hospitals, and disinfection of public areas and at border crossings.  NATO Supreme Allied Commander U.S. Air Force General Tod Wolters has established a task force specifically to coordinate and facilitate NATO efforts to combat the coronavirus.  The Secretary General announced that a similar meeting of NATO’s defense ministers would take place later in April.  Updates on NATO’s coronavirus crisis response can be found at www.nato.int and on the NATO, NATO Force Integration Unit (NFIU) in Estonia, and other related Facebook pages.

One major impact of the pandemic for Estonia, Latvia and Lithuania was the cancellation of exercise Defender Europe 2020, led by U.S. Army Europe with multinational participation, including NATO member states.  The exercise was planned to be the third largest in Europe since the end of the Cold War.  The goal was to test the movement of forces from the U.S. to ports in Europe, and then onward to operational areas throughout the continent, including the Baltic nations, Poland, Germany, the Nordic countries, and Georgia.  The U.S. Army decided in mid-March that due to COVID-19 concerns, the exercise would be scaled back to protect the health, safety and readiness of its soldiers, civilians and their families.  More information on the exercise and the impacts of its cancellation are available at shape.nato.int/defender-europe and at defensenews.com by searching Defender Europe.  The referenced article in Defense News was published on March 18th.

The Foreign Policy Research Institute’s (FPRI) Baltic Bulletin published an analysis on what the cancellation of the exercise means for the Baltic nations.  The article notes that much institutional knowledge of conducting major deployments in Europe has been lost since the end of the Cold War and that Defender Europe-20 “would have represented a major attempt to regain [this] knowledge…as well as to test the local infrastructure.”  It

credits the exercise, even with the cancellation, as a convincing indication that the U.S. Army “is actively thinking about defense of the Baltic states, is actively preparing for that contingency, and intends to be actually and substantively ready to react to that contingency, if necessary.”  The article then discusses the policy dichotomy between the exercise as an act of deterrence against a foe that does not openly acknowledge its deterrent intent.  Russia instead has long characterized NATO actions near its borders as destabilizing and provocative, and has been concentrating its own military forces in the region in response.  The full article can be found at fpri.org

The NFIU in Estonia reported recently that the Baltic Air Policing (BAP) mission is ongoing as the United Kingdom’s Royal Air Force makes preparations to take over from Belgian and Polish fighter squadrons this summer.  The RAF jets will take the place of the Belgian fighters stationed at Šiauliai, Lithuania this summer, while a yet-to-be-identified squadron will relieve the Polish unit at Ämari Air Base in Estonia.  ERR.ee regularly covers the topic, including an article on the mission’s record number of flights in 2019, published on January 17, 2020.

A final item of good news on continued U.S.-Estonia defense cooperation came when ERR News reported that the U.S. had delivered 128 Javelin anti-tank missile systems to Estonia as part of a longer-term agreement to increase Estonia’s defensive capabilities and interoperability with NATO member and partner nations while reinforcing stability in the region.  According to the article, the U.S. “has provided Estonia with over US $100 million in joint defense cooperation in recent years, and takes part in over 150 military-to-military engagements between service members of both countries each year.”  The full article is available at news.err.ee for April 2nd.

EANC will continue to monitor the impact of COVID-19 on U.S.-Estonia relations and keep our community informed on noteworthy developments.  We wish everyone a safe and healthy quarantine period!